The power of Earthworms 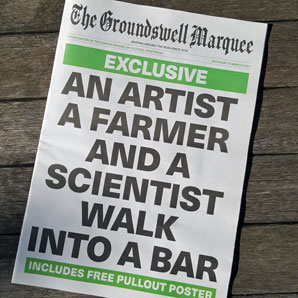 This article was originally published in ‘An Artist, a Farmer and a Scientist Walk into a Bar’ in 2021 by the Kandos School of Cultural Adaptation. You can download the full publication here.

By Lee Fieldhouse and Kirsty Hughes from Island Biologicals.

We were invited to Groundswell [held in Bingara in September 2019] as innovators in regenerative agriculture, to talk about “the power of worms”.

We run a commercial worm farm on Oxley Island, NSW, and we think worms (specifically earthworms) are rad. They have five pairs of hearts, no eyes or lungs, are covered in hairs called setae that act like anchors, and when two copulate they both have offspring.

Objectively speaking they are also incredibly important animals for soil building and soil fertility. Their front end is an organic matter reducer and shredder. Their middle is an anaerobic bacterial fermentation system (kind of like the crock you make sauerkraut in). And their back end is a perfect biostimulant distribution system, straight to where it’s needed at the plant root.

They have a gut which, like ours, utilises microbes to extract nutrition from what they ingest. It’s also kind of like a chook’s gizzard in that they swallow grit to physically grind what they’ve eaten. Their excreta contains some of these microbes plus their by-products (such as enzymes and hormones which stimulate plant growth), and a rich humus of stable carbon, all mooshed in with the sediment particles. Beautiful, healthy soil in other words! When compared to surrounding soil, worm cast has  a huge amount of plant-available minerals: seven times more phosphorus, five times more nitrogen, 11 times more potassium, three times more exchangeable magnesium and one and a half times more calcium.

When we say they poo out some microbes, that’s not an insignificant thing. Soil that has been through the gut of a worm has 10 to 20 times more microbes than surrounding soil. They are major proliferators of plant-relevant microbes. These microbes form the connection between the plant, soil and wider environment. In exchange for sugar (exuded from plant roots), they will even dissolve rock to make sure their plant has all the minerals it needs and create a blanket of perfect conditions around the root (called the “rhizosheath”). They tell a germinating seed which way is up, and they help plants fight off disease and communicate with each other.

Even the tunnelling behaviour of earthworms is helpful. The movement of a worm through soil creates a ‘macropore’ which enables oxygen, water and water-soluble minerals to more readily enter the earth. It creates an easy pathway for plant roots to penetrate new ground – worms are able to dig through quite compacted terrain. Worms secrete a mucus to help them breathe, which adheres to the tunnels and helps stabilise them.

Not all worms tunnel, of course. Compost worms are the non-burrowing ones we co-opt to live in boxes in our backyards to help break down organic waste. They are brilliant upcyclers, to whom nothing is ‘waste’. Well, almost nothing. As commercial worm farmers it’s interesting to see what they reject. The lining of ‘fully compostable’ coffee cups, for example. They don’t like glossy mags or coloured cardboard. They don’t like plastics, including microplastics. And we’ve heard they steer clear of GM.

Compared to the magical alchemical abilities of worms, our innovation is very humble. We just feed them the good stuff and house them without too much disturbance. We are specifically interested in collecting quality cast, so Lee built two big cast harvest beds. They are elevated off the ground with a cutter underneath, and the worms are fed at the top. He then brews the castings up like a big coffee, and we end up with a plant probiotic, or ‘liquid vermicast biostimulant’ we call Biocast.

Our goal is to make this life-promoting worm elixir available to growing systems where it may be missing. Earthworm activity is low or absent where soils have been tilled, where there has been high use of synthetic fertilisers, where pesticides, including fungicides have been used, and where soils are bare, dried and compacted. Also, not all growing happens in the ground, including pot/ bag, green wall and hydroponic growing systems.

If you are growing plants in the ground you can encourage earthworms by using regenerative principles. The simplest principle is to aim for 100% groundcover, preferably living, and as diverse in species as possible. Limiting or excluding the use of synthetic fertilsers and pesticides is a major step too. And best to minimise turning, ripping or otherwise cultivating the soil. Wonderfully, the worms will help you to rely on these methods less and less, as they strengthen the plant, munch up pathogens, and improve access to nutrients.

Until your worms recover though, or if you’re not growing in the ground, there is Biocast. It’s complete with all the living, beneficial microbes, the enzymes, hormones, humic compounds and trace minerals… It just doesn’t dig tunnels. You can, however, spray it on the leaf, which plants respond very well to! Our customers report back glossier leaves, less issues with pest and disease, better fruiting, robustness in the face of weather extremes, and general vigour. Their plants get more life.

Whichever way you go and grow, consider this:

The burrowing earthworm is Nature’s own plough, her chemist, her cultivator, her fertilizer, her distributor of plant food. In every way, the earthworm surpasses anything man has yet invented to plough, to cultivate or to fertilize the soil.

George Sheffield Oliver, once considered the world’s foremost expert on earthworms, penned these words in his excellently titled book Friend Earthworm: Practical Application of a Lifetime Study of Habits of the Most Important Animal in the World in 1941. Even with all the technological advances of the past 80 years, we believe that these words remain just as true today.

We would like to thank KSCA for involving us in their project. The ‘Groundswell’ event at Bingara in September 2019 remains one of our favourite events to have attended! We definitely recommend reading more articles in ‘An Artist, a Farmer and a Scientist Walk into a Bar‘. We especially loved the ‘Earth Oracle’ project by Alex Wisser, and ‘The Humus House’ project by Glenn Morris, Laura Fisher and Jonathon Bolitho.

If you would like to purchase some Biocast, just head to our online shop, or contact us directly.